From the blogging medium Tatyana E: — Of course, an individual’s life on earth influences his or her afterlife, but human negativity cannot care less who you were on earth!  It does not care about your nationality, the color of your skin, your social status, are you rich or poor, do you pray, or not, are you lucky, or unlucky person. For many people, including rich and protected ones, the changes came as surprise and they had no time to adjust to new life. The next testimony comes from Andrey N, a young person, son of wealthy parents who was murdered by a highed killer in post-perestroika Russia. 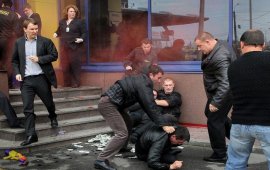 When the historic “Perestroika” (Rebuilding) that brought down the Soviet totalitarian regime, started to morph into “Perestrelka” (skirmish) people did not recognize the depth of the changes at once. Ironically, both names sounded alike, different were only to vowels in the middle of these long words. A Moscow actor Andrei, the hero of our story 3, was one of the casualties of this sad transformation of fight for freedom into hunt for becoming overnight rich and famous, oftentimes by the means of criminal activity.

Andrei: — I went down in a drunken brawl, I did not remember anything, my eyesight was gone, my consciousness was shut off during my last moments on earth. My alcoholism had hurt many people – for instance, my parents, who have pinned their hopes on me. In their eyes I was handsome like some Hollywood star. I attempted to write plays wanting to become a professional playwright. I knew I would make it in the theatrical business. But something was always blocking my road, and I could not understand, if it came from me, or it was built by some external circumstances. Perhaps, it came from that terrible atmosphere which was reining in theatres during the first decade after the collapse of the Soviet Union. The nineties turned into the terryfyingly lean years, and we were afraid of repetition of the Leningrad’s blockade during WWII. Many were scared and confused and embarrassed after the collapse of the Soviet Union, many tried hand in private business which was completely shut down by the Soviet regime that had killed all knowledge and experience how to run it as well. Some jumped into uncharted waters of privete enterprising . But I did not have that courage, that grip, which was demoed by some very independent individuals during switch from communist regime to the free market economy model.

But I was, in some sense, a product of mama’s desire to make me great. However, as soon as I tried to fulfill my mom’s expectations, and create something “great”, my plans bumped into unforeseen obstacles that I was not able to overcome, and I was in the midst of the ruins again. I started looking into producer’s profession.

T: — Did you have any realistic propects to raise some money for becoming a producer?

Andrei: — I think I had because I was able to persuade anyone, yes, acting talent was given to me, and I could convince anyone do anything I wanted effortlessly.

T: — Please, name some movies or stage productions where you have played some roles,  can we see your work?
Andrei: — It is not necessary, as it was time when they produced batches of terrible flicks in the spirit of Dontsova* and Marinina** type police stories. I left suddenly, no one was prepared, and I was mourned only by my mistresses and parents, because their hopes were crumbled to dust! The bitter irony was that already in afterlife I discovered being happy to be released from role become a great one! It is terrible to aspire to become famous. I knew you have gotten it completely  while working on “Prisoners of Fame”.

I will soon return back on earth, I will land back to Moscow, Russia. I believe I have learned  some during my short stay in afterlife as well. I planned to become  a drama and movie producer, as that world depends on producers. Actors are always changeable, there is always a Pete who wants the part, and if it is not Pete then Jack will do, and if something happens to Jack then there will be a Mary available, and in some 5 minutes they will rewrite the part adjusting it to the female character. If this happens to be a leading role, it would be OK as well! We will have instead of the hero, the heroine, and it may look more interesting after all!

I’ll reincarnate soon, and I beg them find me mother who will not make a prodigy of me! Mom’s vanity destroyed me. In theatre they hated me for my parents who arranged everything for me, and someone in my surrounding found the right dudes who mudered me!

I woke up in a puddle. Trying to get up I was convinced that I was drunk, but my head seemed surprisingly clear. I got up and looked around. I was in a place that reminded me the near Moscow area where they killed me. Then I was approached by a man, whom I did not recognize at first. He said that he was Pavel. He was my uncle from mother’s side. He said, “You’re still so young, you would have your share of life on earth, you left too early.

I noticed that there was not a single injury or wound on me. I was quite sober and confused. My uncle guided me to the place called Justice Hall. I was greated and prepared to face judges almost immediately. On that day there were no colletive  transitions, no catasrophes, nothing special, and judges were gald to deal with me. So, I did not wait long for my appointment. They looked at me with pity, but also with a good share of disgust, I could sense that they did not like me.

Someone spoke to me, perhaps, to encourage me, to stop my shaking from a terror of standing there and being judged by them. To me, they seemed like members of the Politburo of the Communist Party, whom we saw face to face when they stood on tribunes — above all of us — side by side during parades, like  Victory parade, or The October Revolution Anniversary parade, or Sport parade — to instill a doze of patriotism in us! A bunch of idiots was standing there, all in astrakhan and musquash hats not to catch cold in Moscow drafts. Someone among judges read my thoughts of being compared to members of  Commnist Party Politburo and  whispered it to his neighbor, and they laughed out loud, what dissipated the tensions and I obtained some hope that I would not be sent to hell for wakeless drinking and whoring, and instead, I would be assigned to some sort of re-educational rehabilitation center.

I tried to keep a lean face, which also caused laughter. On the screen appeared images, the formulas, who knows what and looking at all this mysterious movement on the screen, I got headache. They were soon done with me, as in my head, there were not many intrinsic brain convolutions, maybe one, sitting rather in my ass than in brain! For them I was as simple as some rotten stump!

They passed on me their decision. Then they showed some surprising mercy. They said, “If over there, the environment of given level would seem to you unacceptable, come back, and we will revise it under certain condition. You have to promise not to linger here long, because prolongation would only worsen your condition and make things more difficult for you. If your inention to become a producer is serious one, we can help with healing and look for a family with familiar life style for you. However, for this you have to give up drinking!”

I did not believe a word they said to me, especially about giving up drinking! But when I got to the level they gave me I shied away: it was the astral layer for drunks  and crippled invalides who crawled everywhere.

I endured my colleaugues for a short time and went back to the Hall of Justice. Everybody had forgoten me completely. In short, I looked around to whom to talk. Finally, I noticed a idle robot and approached him. It took a lot of explaining to make him understand what I needed here. He kept repeating, “Id numbner, please!” But I had no idea what what the ID number was. Finally, we found a human being. To my surprise, sinking into a row of boxes he found me. My ID number was so long that there was no way to memorize it. My folder was pulled out and I got my second appointment with judges. I decided not to leave the Justice Hall and settled in a corner of the waiting room. There I met some other folks who got a second Judgment Day because their found that the dwelling levels given to them were too low, and they deserved the better ones. Most received worse assessments, and they regretted snooping around for more and better as our peopole are used to do! I stood there being afraid to have an accidental drink and ruin my chances to improve my settlement. I was given everything, I was assigned for a treatment to a good hospital, and permission to be reborn in Moscow, but then Volodya turned up, and all this flew out of the window!

But God is merciful to drunkards and rogues like myself. I had my third meeting with judges and I was told that one more revision of the fate is available to me. I was offered a chance to reincarnate as a war correspondent when needed, because this occupation did not carry any drinking restrictions. The war correspondents’ life is too harsh to stay sober, so drinking was allowed. Volodya will be soon sent on earth and this will be his fifth forcible reincarnation attempt. This time it will not be aborted as the previous attempts were. Maybe we go together, if this would be possible, or close enough to meet on earth.

It is true that the mental body of the young peopel, who have died too soon, is in better condition than elderly people’s mental bodies. My mb and nearby 3rd chakra could be fine, if it would not carry alcoholism related signs. They are truly unbearably disgusting. If the drunkards would see these pictures and how “beautiful” their mental bodies are, they would drop dead  from shame and sober up for good!  I suggest to create a museum for mediums who can archive their studies. Believe me, after a couple of short years the Russian drunkenness would be a thing of the past!  .

T — Maybe it would make sens to pair the reports of drunkards’ true conditions with reports of conditions of informers, what would you say?

Andrei: — Escellent idea! Let them see that ruining other people’s lives will castrate their own lives, corcking up any chances for development, especially in subtle world, as the informers and denouncers would incarnate only as streat cleaners and janitors. In that lifetime, all other roads would be closed for them!