The note from Tatyana, the medium: Of course, your life on earth influences your life in heaven, but the materialization of  human negativity cannot care less who you were on earth!  It does not care about your nationality, the color of your skin, your social status, are you rich or poor, and how do you pray, or you do not pray at all, or if you were on earth a lucky guy, or a victim of  terrible circumstances . This materialization of negativity is a Great Equalizer, it seems to act totally automatically, despite having huge impact on the souls’ destiny both on earth and in heavens. And the question is why the knowledge about it had been buried in various secret societies, and why today some mediums, like myself, are encouraged by their guardian angels to write about it. Let move to another testimony from a person who suffered death from gangrene in besieged Leningrad (known as Leningrad’s Blockade) 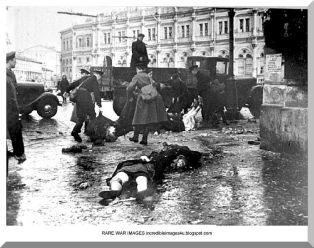 After  the end of WWII, we received an official letter about my uncle Juri, a soldier’s death from liver failure in a besieged  Leningrad’s hospital. The spirit of Juri said that this was not true.

The number of civilian casualties of Leningrad Blockade (September 1941 – January 1944) was big. Out of city 3,5 million people, only 700 000 lived to see the day when the siege was lifted. War battles were tense. General Zhukov led the Red Army major offensive. The president Roosevelt promises aid. The Soviet Winter counter-offensive came to a halt, after having pushed the exhausted and freezing German Army back 62–155 mi from Moscow. German “Operation Barbarossa” and Blitz Krieg failed. Ahead was a lasting war that would exchaust both sides.
Out of the backdrop of these war events, out of the ruins of seiged Leningrad, appeared a soul of a war casualty Yuri, my uncle, the wounded soldier, and here is his story how he died and what consequences it had on his afterlife.

Yuri: – You’re asking terrible things, you know, what happened to me, I died of gangrene caused by frost. The pain was indescribable.

T: – How long the torment lasted?

Y: – The army had forgotten us in ruins of an unheated building (damaged by bombardment) during winter time. We did not know, was it a former school, or a communal apartments, or maybe something else, what diffrence it made?

T: – How long it lasted, according to your calculations?

Yuri: – Probably not too long. We called to have someone to shoot us dead in order to free us from unbearable pain, but there was nobody around, nobody, not a single soul, and earlier the weapons were taken from us, so we had no means to shoot or commit suicide, or kill each other…

Y: – About eight men, I am not sure, I do not remember it clearly, maybe my brain refuses to recall!

T: – I hear anger in your voice. You started getting angry. Let it go, it is over, if you reincarnate, something like this would never ever happen to you!

T: – Have you tried to release this?

T: – Do you feel relieved when you finally left the body.  How was it?

Y: – At the end of the frost, I suddenly fell asleep, and it was a relief, and when I woke up, I was completely healthy, and I did not feel the cold anymore. And I thought I was completely recovered, but I walked and walked across a snow-covered plain, and suddenly I saw that I started to melt. And in front of me something threatening, looking as dark thundercloud carrying mud and dirt started to take shape.

Tatyana: Here I have to interrupt Yuri’s story. The reader may ask, what Yuri is talking abut?  However, this is exactly what Leslie Flint was talking mentioning his overloaded mental body clogged by materializations of his negative thoughts and emotions. We will talk more about it later, in following posts. On earth we did not see our thoughts, but then vibrational frequences change, this materialization occurs. Positive thoughts seems to “fly away”, and negative thoughts seem to glue themselves to mental body and also to energy channel’s mouths. If asked, spirits talk about this phenomenon openly. This materialization of our negativity has huge impact on human life, and death does not end it! The  uncle Yuri story shows how far goes the impact of negativity, and it may explain why all known to us religions stress the same thing — the virtue of calm and positive thinking!  I asked Yuri to continue his story.

Y: – Tatyana, I cannot speak about it now. Your grandmother asked me to pass you her greetings, and also some of her advises. She said that you do not have to beat your head against the wall. Because, everything you need will be given to you. Believe, relax, and it will come …She is telling me the same. … My problem is that inside of that ugly visions what I see in front of me, there is something moving always.

Yuri: — It looks like a dark thundercloud containing mud and dirt with always moving maggots in it.  And this dark cloud is always seeking you out, accompanying you, and you cannot get rid of it. Sorry talking about the nasty side of the story. You asked about it, and this is just what you’re asking, and I was told that nothing could be changed! And I had chosen to lie about it to cover up that shame, and people see through my lies, and make fun of me. In   public places, it seems to me that I am naked.

Yuri: — In whole, it is a terrible vision of the war in front of you at the level of the stomach and up to the heart. This is not a belt, but it goes ahead of you and you want to get rid of it, you see pus, and it seems that sick screams have stuck in that dirt and pus. Now I know, that beyond the mental body the heart and the throat all carry debris that block the influx of cosmic energy.

T: – Do you see it all the time, or there are some breaks in seeing it?

Y: – I have not even tried to let it go, I do not say that nothing can be done. But if you reveal me some methods how I can get rid of it, I’m going to be treated. I do not want to continue dragging this burden along through eternity, you know what I mean?  What did you do with your garbage? You had a plenty of it, but now your burden had diminished significantly. How did you do it?

T: – I will tell this later, do not switch the attention from you to me!  Maybe you want to add something?

Y: – When I’m drunk, I just do not see it, I’m going to a different vibration, so we are all here trying to escape this view as often as possible. When we were in that cursed abandoned house where we suffered, and prayed God, and cursed God, and getting drank from vodka we blasphemed rotting alive, but our souls were still sitting in our doomed bodies, taking in everythingwe did or say, until pain, finally, got us!

I wanted to say that pain is not a cleanser from sins, as some think! They do not know what they are talking about. The pain is the most terrible “sinner”, a monster! Or call it a monstrous entity, you name it!  The dark cloud contains graphicly  the consequences from blasphemy that came from our gangrena pain, all our drunkenness sits now in my horrific visions which are attached to my mental body in the 3rd chakra area.

Tatyana: I have to interrupt Yuri’s story again. I recall that Elvis was speaking from the spirit world that after the transition he had to help  OD folks who suffered from the impact of terrible visions after transition. Elvis tried to cut out these visions surgically  establishing for himself the surgeon’s career in some future lifetime. Regrettably, at a time when Elvis spoke about it, I had no idea what he was talking about. Thank God, i wrote it down without asking any questions, Now it gives me a channce to reread  his words and introduce them to reader with better understanding what Elvis was talking aobut. Pay attention to one undisputable detail: the soldier who died from horrific  pain  caused by untreated gangrena and visions of drug addicts look  similar. Both kinds of visions are hard to tolerate!  In other words, these visions have no “moral consideration”. By the way, in the book “Prisoners of Fame” Paramahansa Yogananda hints to it. And we will have reasons to read and learn from his comments about impact of negative thought forms on soul’s life in subtle world over and over again.

Y: — When I stay with my mother, it somehow helps to drag my visions along. At mama Luba’s home, there is less shame, there is something to pacify the pain from suffering.  But as soon as I leave my mother’s place, the emotion of being ashamed of myself returns  with vengeance!  If you find anything how  to handle this, tell me, and it will help me!

T:  According to a guru advise, I create an imaginary fire in the middle of my room. I ask Yuri to throw his painful visions into this imaginary fire and watch, if it would burn them to ashes?

Y: — I got some of it into fire! The pain unwinds in form of rotten bandages. Falling in fire, they are raging.

Y:– There are no end to these bandages. I have to continue another time. Tatyana, I’ll go get drunk and forget myself, I cannot look at them anymore right now!

Besieged Leningrad, the photo of an unknown soldier, one of the millions who died or got crippled in that war.